Remember the days when police officers looked like this? 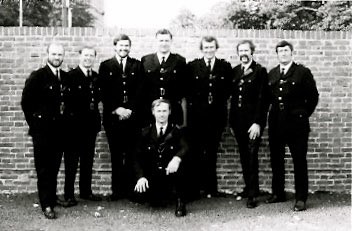 Those days are long over if last night’s TV news bulletins in Queensland were anything to go by.

The 2018 Gold Coast Commonwealth Games seems to be taking a weirdly warped pride in the extent to which its paramilitary police and 4,000 security staff will be let loose on excited sports fans. Ticket-holders are being told to get there early, presumably so they can be treated to the touted “airport-style screening.” If the screening is anything like JFK or Heathrow’s, then I suppose we should expect the wand treatment and crotch-fondling that masquerades as a patdown to come with a dollop of surly intimidation and over-the-top pettiness from some power-crazed, epaulette-wearing, minimum wage drone.

On one particular 6pm news bulletin, there was an outbreak of silliness that almost defied satire. Up popped propaganda maestro and GOLDOC chairman Peter Beattie to sternly warn us we should not wear clothing emblazoned with political slogans (or myriad other unacceptable wording) because there were “other places” people can do this. Really? So rather than the police being a uniformed wing of our leaders that prevents crime or sees that it is punished – it’s going to be one that spies out political incorrectness.

If Games staff will be scouring the crowds looking for people wearing T-shirts with slogans, and all manner of beastly things, it does beg the question – have they nothing better to do? These tactics only serve to look increasingly preemptive and display a Steven Siegal Under Siege-like mentality.

We also learned yesterday that the Games will also have police with the capability of shooting down drones. All very reassuring indeed. Then again, even if the dumbest terrorist or crook arrives at the Games in a helicopter or spaceship, they will still have to get out of it in order to commit their crime. At which point Plod will (or should) spot them and deal with them accordingly.

What this whole security exercise seems to be missing is that the Games’ police – and security staff — are supposed to be inclusive of the community, not divorced from it. Policing is a community issue that works best when a human face is involved. Relationship-based, intelligence-led policing is, or should be, the gold standard when it comes to pro-active policing. The best intelligence is derived from talking to people, not reading reports spewed out on a computer and speeding past people in black armoured vans.

It seems GOLDOC has become beguiled by its TV image; with its paramilitary security teams as the knights on horseback — fully armed and hurtling to defend us against dubious bogeymen amidst howling sirens and strobe lights whilst taking to the skies in helicopters and fighter jets. It’s quite the recipe for tyranny. And I suspect most spectators, and TV viewers at home, would prefer the emphasis was on pageantry, passion and fireworks – not on the Games’ thin blue line.

Beyond what the police are supposed to be doing at the Games, it’s still unclear what role the largely anonymous private security contractors will play. Hopefully they will be confined to just issuing the wrist-bands and confiscating food and drink contraband.

I understand having a uniformed authority as a presence at the Games plays its part in deterring potential miscreants—whether they be pickpockets or terrorists. I’m certainly not anti-police and I’m not lost in a golden age of policing that never was. But since vast slabs of public money go towards our police service, it’s perfectly reasonable to ask why we’re going down this quasi-military path.

There’s been so much talk of the Gold Coast Games needing to be “the friendly Games”. Why not get adventurous, and have police officers looking like police officers instead of members of the LAPD? Lose the scowl, ditch the gun, capsicum spray and the other hardware, and go round spectators, approachable and on foot.

The law exists to restrain our worst impulses, not encourage our best. But if it’s a choice between having a police militia or a public-serving police force, I know which one I’d rather have.

View all posts by Admin